Counting of the Omer (Sefirat HaOmer) 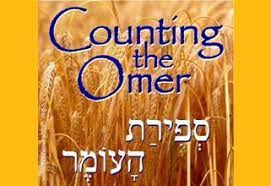 When to Count the Omer

The counting of the Omer begins on the second night of Passover. Jews in the Diaspora generally integrate this counting into the second Seder.

The Omer is counted each evening after sundown. The counting of the omer is generally appended to the end of Ma’ariv (the evening service), as well.

One stands when counting the Omer, and begins by reciting the following blessing:

Blessed are you, Adonai our God, Sovereign of the Universe, who has sanctified us with your commandments and commanded us to count the Omer.

After the blessing, one recites the appropriate day of the count:

Today is the first day of the omer.

In Leviticus, the third book of the Torah, it says, “You shall count… from the day that you brought the Omer as a wave offering” (23:15). The Omer was a measure of barley (approximately two quarts) that Jews brought as an offering to the Temple in Jerusalem on the second day of Passover.

The Biblical injunction is to count the forty-nine days from the second day of Passover until the eve of Shavuot. Although we no longer bring barley to the Temple, these seven weeks are still known as the “the Omer ” and the ritual of counting each night is known, not surprisingly, as “Counting the Omer.”

Passover celebrates the liberation from Egypt, and Shavuot celebrates the receiving of Torah at Sinai. By counting the Omer, we symbolically mark the time between liberation to the assumption of responsibility in the acceptance of law, making a collective commitment to living an ethical, rule-governed life of divine purpose.

The Hebrew word for Egypt is Mitzrayim, a word that can also be translated as “the narrow place” (from the word tzar or “narrow”). Mitzrayim can represent all forms of conformities and definitions that restrain, inhibit, or otherwise restrict our free movement and expression. In retelling the Exodus story on Passover, we are symbolically birthed from the “narrow straits” through the miracle of the parted waters into freedom, but we are not yet sufficiently mature to receive the Torah at Sinai – neither as a people nor as individuals. At Sinai itself, God sent kolot (which means “thunder” in biblical Hebrew) in anticipation of the giving of the law. The period between Passover and Shavuot was designated as an opportunity for personal growth and character refinement.

Jewish history, and most notably the kabbalist tradition, defined this period as one of preparing to receive the Torah at Sinai by reflecting on one’s personal character refinement. The kabbalists used an emotional ladder of the sefirot – aspects of our soul and God’s soul – to illuminate each day. Over the centuries, various ritual objects such as Omer counting books or small counting machines have been developed to help people remember what day of the Omer it is and what divine attribute to focus on on that day’s leg of the journey from Egypt to Sinai.

Counting the Omer is an exercise in the discipline of mindfulness. Counting each of the days from Passover until Shavuot sounds deceptively simple, but it is not an easy task. It requires a consciousness – or a mindfulness – to remember to count each night. (Traditionally, anyone who misses a day altogether may pick up the count when she or he remembers, but without the blessing. This omission is because the blessing recognizes the commandment to do the whole counting – or to practice mindfulness for 49 days straight.) Like learning a new language, practicing an instrument, or starting an exercise routine, counting the Omer is demanding. However, just as these other disciplines reward us in both expected and unexpected ways, so too the counting for 49 days stimulates a sense of accomplishment, new awareness, and mindfulness.

Making each day count is a valuable lesson which adopting the practice of counting the Omer reinforces. Counting each of the days of the Omer reminds us that all of our days are numbered, and it is our responsibility to make each day count. The deliberate way in which the Torah numbers the days of Sarah’s life, “one hundred years and twenty years and seven years” signifies both the fullness of her days and the significance of each and every day. We count the Omer in a similarly careful and focused manner in order to help us recognize the completeness of these days and of each day.

We also learn from the years of wandering in the desert and from the individual struggles represented in the stories of our heroes and heroines that waiting itself can be a sacred activity, an opportunity for reflection and trust. Although the goal of the count may be the encounter with God at Sinai, we take meaning from the journey each step of the way.