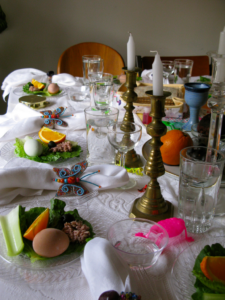 Pesach, or Passover, is a major holiday in Jewish tradition, and is one of the three pilgrimage holidays, along with Sukkot and Shavuot.

Pesach, which starts on the 15th day of the Hebrew month of Nisan (usually in April), lasts for eight days and is celebrated to commemorate the exodus from Egypt – one of the main stories in the history of the Jewish people and in western culture in general.

According to the Torah, the Israelites lived in Egypt, and were enslaved by the Egyptians. Moshe (Moses), an Israelite who grew up in the palace of Pharaoh, the king of Egypt, became a leader of the Israelites and asked Pharaoh to allow them to return to the Land of Israel. When Pharaoh refused, Moshe led a campaign that culminated in his people’s hurried departure from Egypt, toward the Sinai wilderness, where they lived for 40 years.

According to Jewish tradition, during this long journey in the desert, led by Moshe, his brother Aharon and his sister Miriam, the Israelites became a united people as they prepared to conquer the Land of Israel.

Pesach is also called the holiday of Freedom, and this aspect of the holiday is emphasized in the rituals and prayers: the exodus from slavery to freedom symbolizes physical and spiritual redemption and man’s aspiration to be free.

Another important element of this holiday is family togetherness. On the eve of the holiday, called Seder night, due to the ceremonial Seder meal that is celebrated that evening, whole extended families gather around one table. It is also an important Jewish precept to invite others who have no family with whom to celebrate the holiday.

Another name for Pesach is the holiday of Unleavened Bread. The story of the exodus from Egypt relates that the Israelites left Egypt hurriedly and the dough they had prepared had no time to rise, so they baked it into matzah, unleavened bread. One of the important precepts of this holiday is the abstinence from eating leaven – any baked goods prepared with flour and allowed to rise, or prepared foods containing flour. Instead of bread, Jews eat matzah. Religious (and traditional) Jews observe this aspect of the holiday meticulously.

One more name for Pesach is the holiday of Spring, marking the season in which Pesach is celebrated.

The first day of the holiday, as well as the last day (which is known as the “second holiday”) are holy rest days, on which all productive work is forbidden. The intermediate days are called Chol ha-Mo’ed, and are part-holiday, part-regular days.

Holiday Customs – How is Pesach celebrated?

Eating matzah – Matzah is flat bread made from unrisen dough. Apart from during the ceremonial Seder meal, eating matzah is not compulsory, but for many Jewish families (religious and traditional alike) matzah is the accepted alternative to bread throughout the holiday.

Biur chametz – the eradication of leaven – In the weeks prior to Pesach, Jews customarily clean their homes thoroughly to ensure that not one crumb of chametz remains. Non-religious Jews often use this custom as an opportunity to “spring-clean” their homes and create a holiday atmosphere. The religious view this as a precept that must be strictly observed, and follow a special process to remove chametz even from their dishes and cooking utensils, or they use special dishes just for Pesach. On the night before the day on which Pesach begins, it is customary to search (bikkur chametz) in all the corners of the house by candlelight, to make sure there are no crumbs anywhere.

The Seder – This is a lengthy ceremonial meal held on the eve of the holiday (the evening before the first day of the holiday). The family gathers around the holiday table for the Seder – the reading of the Haggadah and the holiday meal. The Haggadah is a compilation of texts from Jewish tradition – passages from the Bible, from the Mishna, commentaries and songs, whose main theme is the exodus from Egypt. The purpose of the reading of the Haggadah is to transmit the Pesach tradition from one generation to the next (thus fulfilling the Torah precept, “and you shall tell your son”), and the rituals are designed first and foremost to arouse the children’s curiosity. The rituals during the Seder are all symbolic, such as the eating of matzah and bitter herbs, the drinking of four goblets of wine, singing together, and of course the big meal.